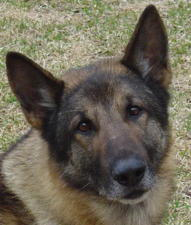 The Schutzhund BH is for our students that want much higher levels of an obedience trained dog. The BH is was designed for the entry level of Schutzhund which test the mental and physical ability of a dog before the dog can enter into SchH 1, SchH 2 and SchH 3. Because of this, not all dogs can achieve this level of training.

Test on the training Field. Total Points:60
Each individual exercise begins and ends with the basic position. The dog sits directly next to its handler on the left side with its right shoulder at the handler’s knee. Assuming the basic position is allowed only once at the beginning of each exercise. The handler is to stand in the basic position in a sportsmanlike manner. Standing straddle-legged is not permitted. The basic position at the end of an exercise can be the start position of the following exercise. Handler help is not permitted and if used, results in point deductions. Carrying something to motivate
the dog, such as a toy, is not permitted. If a handler cannot perform an exercise correctly because of a physical disability, the judge must be informed of this prior to the beginning of the trial. If a handler’s disability doesn’t allow the dog to heel on the left side, the dog may heel in a comparable position on the handler’s right side. 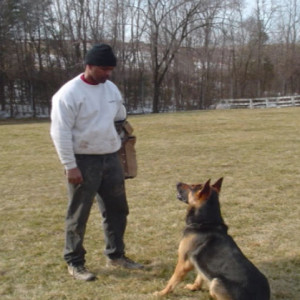 The judge gives the command to begin each exercise. Everything else, such as the turns, halts, changes of pace, etc., is carried out without direction from the judge. However, it is permitted for the handler to request these directions from the judge. Praising the dog is permitted at the end of each exercise. Afterwards, the handler may take a new basic position. Between praising the
dog and new start there should be a distinct pause (about 3 seconds). The dog must remain at heel between exercises.

On Lead Heeling (15 points). Command:” Heel” (“Fuss”)
From the basic position at the command “Heel” (“Fuss”), the on-lead dog, wearing an animal rights approved collar or harness, follows the handler gladly. The lead may not be on the live ring of the collar.

At the beginning of the exercise, the dog and handler walk 40 to 50 paces straight ahead without stopping, perform an about turn and after 1 0 to 15 paces, show the fast and then slow paces of a minimum of about 1 0 paces. At a normal pace, they are then to execute a minimum of a right, a left and an about turn. The dog must stay with its shoulder at knee level on the left side of the handler. It must neither forge, lag or go sideways. The about turn is to be shown by the handler as a left about turn. 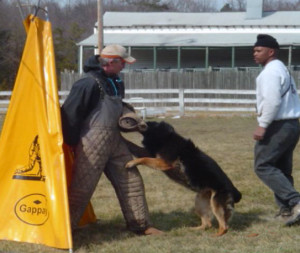 The command “Heel” (“Fuss”) is permitted only when starting from the basic position and at the changes of pace. When the handler halts, the dog should sit quickly without help from the handler. The handler may not at this point change the basic position and especially may not move to the dog if it’s sitting apart from the handler. During the heeling routine, the lead should be held in the left hand and must hang loose. At the direction of the judge, the handler and dog go through a group of a minimum of 4 people. The handler must halt at least once in the group. The group is to move randomly. Lagging, forging or deviating to the side by the dog while heeling, as well as pausing on the turns by the handler, is incorrect.