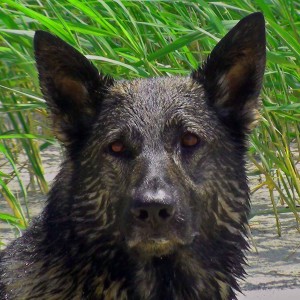 Group
The heeling through the moving group is to be shown both on and off lead. While heeling in the group, a minimum of once around a person to the left and once to the right (for example, in the form of a figure “8”) is to be performed. Once during each pass through the group, the handler must halt near a person. The judge may require the handler to repeat the exercise. Praising the dog is permitted only in the final basic position after leaving the group. 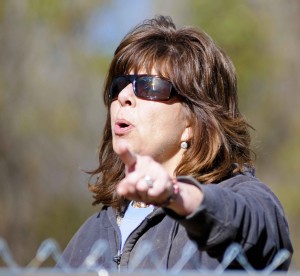 Off Lead Heeling (15 points). Command:” Heel” (“Fuss”)
At the direction of the judge, the lead is removed while the dog is in the basic position. The handler hangs the lead over the shoulder or sticks it in his/her pocket. (In both cases, the lead goes on the side opposite from the dog, either over the left shoulder with the snap on the right side or in the right side pocket.) The team returns immediately through the group with the dog off lead, halting at least once in the group. After leaving the group, the handler briefly takes the basic position and then begins the off-lead heeling routine comparable to Exercise 1.

Pattern may be worked with the turns in the opposite direction 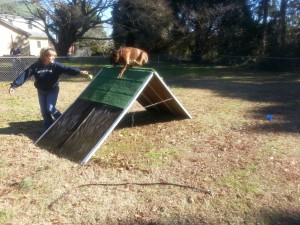 Sit Out of Motion Exercise (10 points). Command: “Sit” (“Sitz”) From the basic position and with the dog heeling off lead, the handler walks straight ahead. After a minimum of 10 paces and on the command “Sit” (“Sitz”), the dog must quickly sit, without the handler pausing or looking back. After an additional 30 paces, the handler stops and immediately turns towards the dog. At the direction of the judge, the handler returns to the dog and takes the basic position on the right side [of the dog]. If the dog stands or lies down instead of sits, there will be a deduction of 5 points.