Down Out of Motion With Recall (10 points)
From the basic position the handler gives the command “Heel” (“Fuss”) and walks straight ahead. After a minimum of 10 paces and on the command “Down” (“Platz”), the dog must quickly lie down. Without other influence on the dog and without turning around, the handler walks straight ahead another 30 paces, turns immediately towards the dog and stops. At the direction of the judge, the handler calls the dog. The dog should run to the handler quickly and happily and sit in front. At the command, “Heel” (“Fuss”), the dog sits next to the handler. If the dog stands or platz, but the recall is perfect, 5 points will be deducted.

Down Under Distraction(10 points). Commands: “Down”(“Platz”),”Sit”(“Sitz”) At the beginning of the obedience performance of the other dog, the handler downs the dog from the basic position at a place designated by the judge without leaving the lead or any type of article with the dog. The handler goes 30 paces away and stands at this distance with his/her back to the dog. During the Down, the dog must remain lying calmly. At the direction of the judge, the handler goes to the right side of the dog and at another judge direction, brings the dog into the basic position with the command “Sit” (“Sitz”). If the dog sits, stands or is restless, only partial points will be awarded. If the 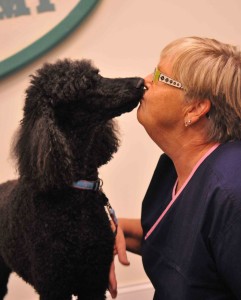 dog moves more than its own body length from the down position, the exercise is failed.

Restless behavior on the part of the Handler, as well as other hidden help is incorrect.

Bitches are to be downed separately, if possible.

A dog which does not earn a minimum of 70% (42 points) in exercises 1 through 5 is
dismissed from further participation in the trial.

Test in Traffic. General
The following exercises take place outside of the training field in a suitable environment. The judge along with the trial chairman determines where and 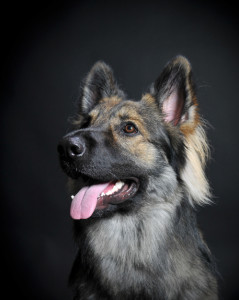 how the exercises in the public traffic area (streets, avenues or squares) will be carried out. Public traffic may not be impeded.

Because of their character, implementation of these parts of the test requires a considerable amount of time spent on them. The performance requirements may not be impaired by the superficial testing of too many dogs.

No points are awarded for the individual exercises in Part B. In order to pass these parts of the test, the total impression of the dog as it moves through traffic/the public is relevant.

The exercises described in the following are suggestions and can be modified by the judge to fit the local conditions. If the judge is unsure in the rating of the dog, he is authorized to repeat the exercises or to alter them. 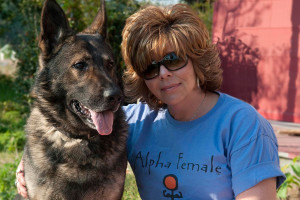 Order of Procedures
At the direction of the judge and with the dog on lead, the handler walks along an assigned section of a street on the sidewalk. The judge follows the team at an appropriate distance.

The dog must be indifferent to the pedestrian and motor traffic. 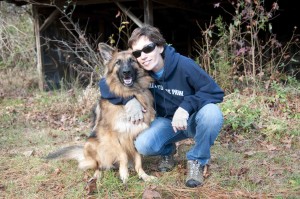 On the way, a jogger (someone assigned to do this, not a stranger) crosses the handler’s path. The dog should appear neutral and indifferent.